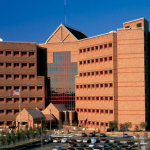 SAMMC has a history dating back to 1879 when the first Post Hospital opened as a small medical dispensary located in a single-story wooden building.  During the early years, the Post Hospital was in temporary structures, and it was not until 1886 that the first permanent hospital was built.  In 1907, an 84-bed Station Hospital was constructed on the west side of the post.

In 1929, Brigadier General Roger Brooke assumed command of the Station Hospital, a position he held until 1933.  Brooke is credited with instituting the first routine chest X-ray in military medicine.  In July 1936, the cornerstone was laid for the construction of a replacement Station Hospital.  By November 1937, the new 418-bed hospital was operational, having cost $3 million.  The new hospital was the first in a series of moves which changed Fort Sam Houston from an infantry to a medical post.

In 1941, the Station Hospital prepared for an overwhelming flow of casualties from World War II battlefields by converting a 220-person enlisted barracks into additional patient wards.  Today, SAMMC is the United States Army’s premier medical center.